by Ken Moore and Dan Hughes

by Ken Moore and Dan Hughes

A previous post introduced the RELAPSE-1 computer program. At that time we indicated that getting the report uploaded was on our To Do lists.

Update June 22, 2017: The last two pages are missing, one of which has the References: the RELAP2 manual can be used to see these. We’re working on getting the missing pages posted.]

END_OF_DOCUMENT_TOKEN_TO_BE_REPLACED 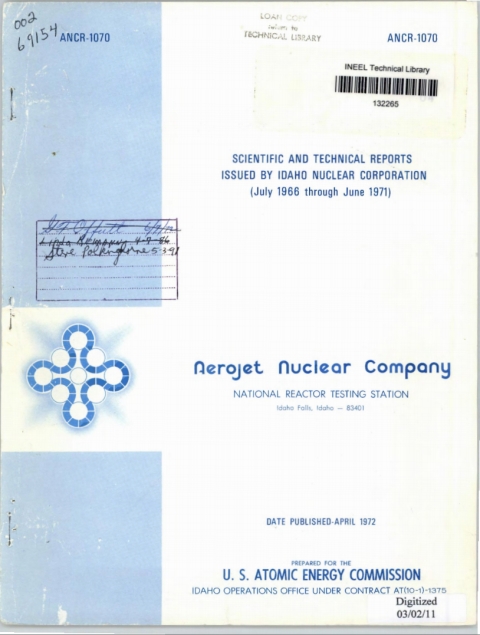 by Pete Davis
I arrived at camp NRTS in July of 1961 as a freshly minted employee of the Atomic Energy Commission, having accepted a position with them upon graduation from the University of Wyoming with a degree in physics. I accepted their offer primarily because they would pay me full salary and send me to graduate school at their expense. My arrival in Idaho Falls was not auspicious; I got a ride to Jackson with a friend and then took a bus to Idaho Falls. I did not have a car, did not know anyone, had no place to stay and was nearly destitute. I found a spartan apartment (E-street Apartments) which was within walking distance to my place of employment (which I found on a map in the phone book), the AEC Idaho Operations Office on 2nd St. I spent the summer in IF, getting indoctrinated into the workings of the AEC and the site. In September I started graduate school in Oak Ridge, Tennessee (Oak Ridge School of Reactor Technology) and graduated the following June. I returned then to Idaho Falls and was assigned to the Reactor Safety Branch at the Operations Office. This branch was responsible for monitoring all the reeactor safety related work at INEL, including PBF, SPERT, LOFT, Semiscale, SNAPTRAN and the associated analytical efforts.

END_OF_DOCUMENT_TOKEN_TO_BE_REPLACED

I started an attempt to write some about neutrons at Camp NRTS. I’ll be working without a net again as Neutrons are far afield of my areas of experience. I do molecules, don’t do Neutrons. After all, nobody actually understands Quantum Mechanics.

I decided that I should check to see what The Google could find on the subject. Google came back with this list of really old reports all associated with Camp NRTS back in the days; ca. late 1950s, early 1960s. Over 360 hits are listed.

The reports are associated with the early machines built at Camp NRTS and design and experiments and analysis of these.

Not knowing anything about neutrons I just started checking names of the authors of the reports. I vaguely recall hearing many of the following, and limited interaction with most. Maybe you’ll know these and others given at the Google results.

The subjects of this post are well outside my areas of interests and experience. So, I’ll be working without a net. All corrections to incorrectos, and amplification of all aspects by providing additional information will be greatly appreciated.

END_OF_DOCUMENT_TOKEN_TO_BE_REPLACED

The URLs below will lead you to reports and papers written by the indicated person. This list is comprised of all (or at least almost all) of the people you worked on the Idaho Nuclear Code Automation (INCA) system of Safety Analysis Computer Codes (SACCs). Let’s say that this is the Presently Reconstructed Canonical List, and that it is subject to change. Aren’t all Canonical Lists built from Chronologically Mature memory after 45+ years subject to change? The personnel have been mentioned in this post.

END_OF_DOCUMENT_TOKEN_TO_BE_REPLACED

Check out what was being reported back in the day.

END_OF_DOCUMENT_TOKEN_TO_BE_REPLACED

The URL links below will lead you to Google Scholar search results for the respective phrases / words. Some of the hits have online copies of the complete reports and papers. Sometimes you can get lost in this old literature, in both the content of a given URL and in bouncing around from URL to URL.

END_OF_DOCUMENT_TOKEN_TO_BE_REPLACED

which appears to be prepared for presentation at a Conference, lays out the Big Picture of the Grand Scheme of Things for the Idaho Nuclear Code Automation (INCA) system of Safety Analysis Computer Codes (SACCs).